Briefly describe your requirements for your industrial truck or tell us about your daily challenges in production and warehouse logistics or textile technology. 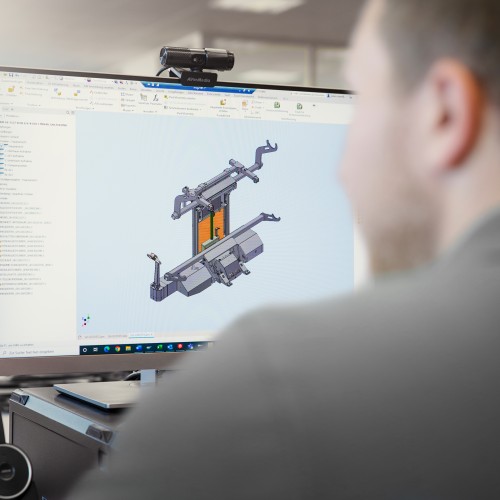 DEUTZ engines stand worldwide for innovation and quality made in Germany. The company would never have reached this position if it had not repeatedly questioned and optimized processes. Sometimes these are major milestones - such as the orientation of the diesel traditionalist to electric engines - or they can be smaller process improvements with a big impact. For example, by a Genkinger special electric high lift truck.

So series engines and exchange engines (X Change) of DEUTZ AG are transported by a special electric high-lift truck from Genkinger from the assembly line to the stationary assembly and from there to the paint shop. Every year at the DEUTZ site in Ulm, thousands of engines undergoing general overhaul, 50 percent of which are no longer available on the market as new engines, receive the quality promise of a new engine. The throughput time from receipt of order to delivery of the reconditioned engine is only a few working days. Part of this continuously optimized process chain is a Genkinger electric high-lift truck. The custom-built stacker is used to transport the DEUTZ engines from the apron conveyor to the assembly island and from there back to the lifting and lowering system of the paint shop. The weights vary between 280 kg from the small 1011 engine to the traditional air-cooled 12 cylinder with 1,600 kg.

The Genkinger high-lift truck replaces a much larger standard forklift, which previously accommodated the engines via a cantilevered crossbeam. With the Genkinger device, the dimensions were significantly reduced in order to obtain additional safety in the partly narrow tramlines. With dimensions of 1000 mm width x 1800 mm length to 3000 mm height with the mast extended and a projection of the crane hook traverse of only 600 mm, the desired compactness was achieved.

The turning radius of 1585 mm also creates tighter curves in DEUTZ production. Klaus Gaus, department manager and foreman final inspection, final assembly and painting at DEUTZ, explains, "The operators of the Genkinger high-lift truck can see the engine to be transported from all sides. This increases work safety many times over." The key detail of the high-lift truck is a special lifting unit with a hydraulic turning device. A large cantilevered boom allows the DEUTZ engines to be rotated 90 degrees. Compared to the previous unit, this option saves numerous steering movements because the boom controls and adjusts the engine hanging on the boom. Elmar Mößlang, sales consultant for Genkinger, says, "The compactness of the unit and the rotating function in the boom with short travel distances prevent the different hangers from swinging up." Another safety feature, he says, is the automatic steering angle-dependent speed reduction to up to 1 km/h.

An additional advantage of the high-lift truck: "It has a lower service effort than its predecessor," says Klaus Gaus. In addition, he says, virtually all employees involved can operate the high-lift truck, making DEUTZ even more flexible and effective. 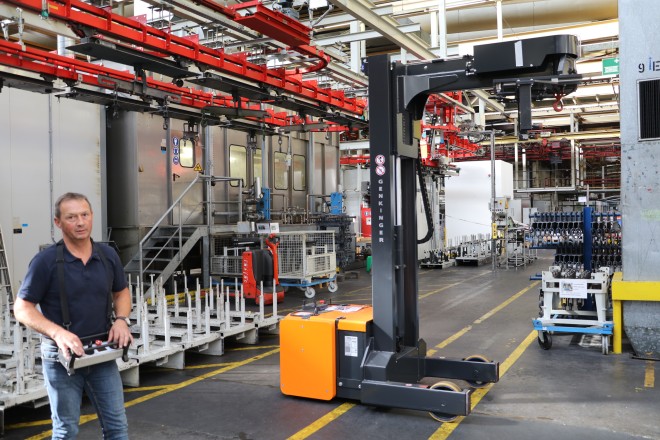 The maneuverable, remote-controlled high-lift truck transports DEUTZ motors with weights from 280 kg to 1,600 kg without blocking the aisles.
Image 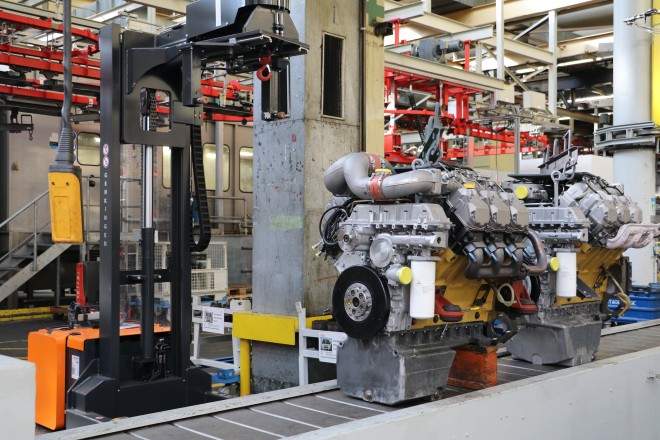 Picking up the motor on the belt by hook.
Image 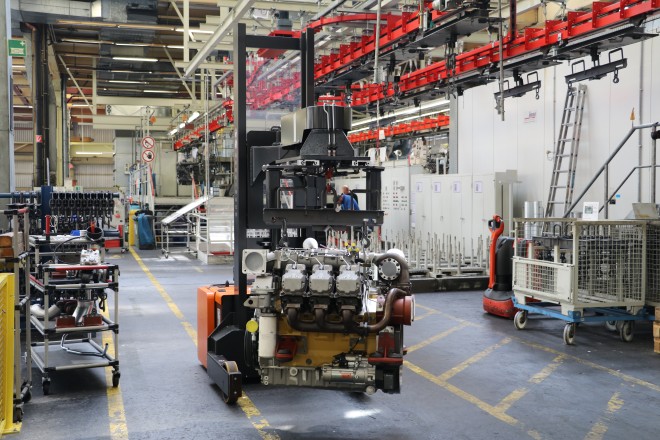 DEUTZ engine on its way to assembly, where it will undergo a general overhaul
Image 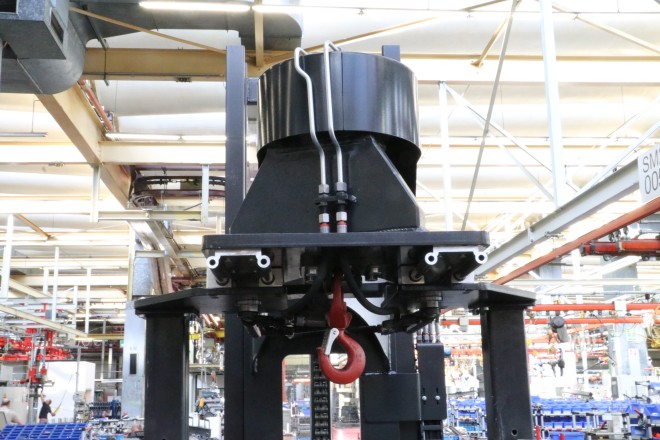 The motors are suspended from a crane hook crossbeam that protrudes by only 600 mm.